In 764 AD, after the rebellion of Fujiwara Nakamaro was suppressed, for the sake of the peace of the country, a million 3-storied miniature wooden pagodas were made by order of Empress Shoutoku. In 770, they were dedicated to Ten Major Temples including Houryu and Kofuk Temples. Dharanis (Buddhist charms) were placed inside the pagodas and are now regarded to be one of the oldest printed matter which the year of printing is bibliographically established. The paper used is made from hemp and Kozo material and regarding the method of printing, there are two schools, one asserting wood block and the other, copper plate. At present, a part of these 1 million pagodas and Dharanis remaining in Horyu Temple are designated national important cultural properties. 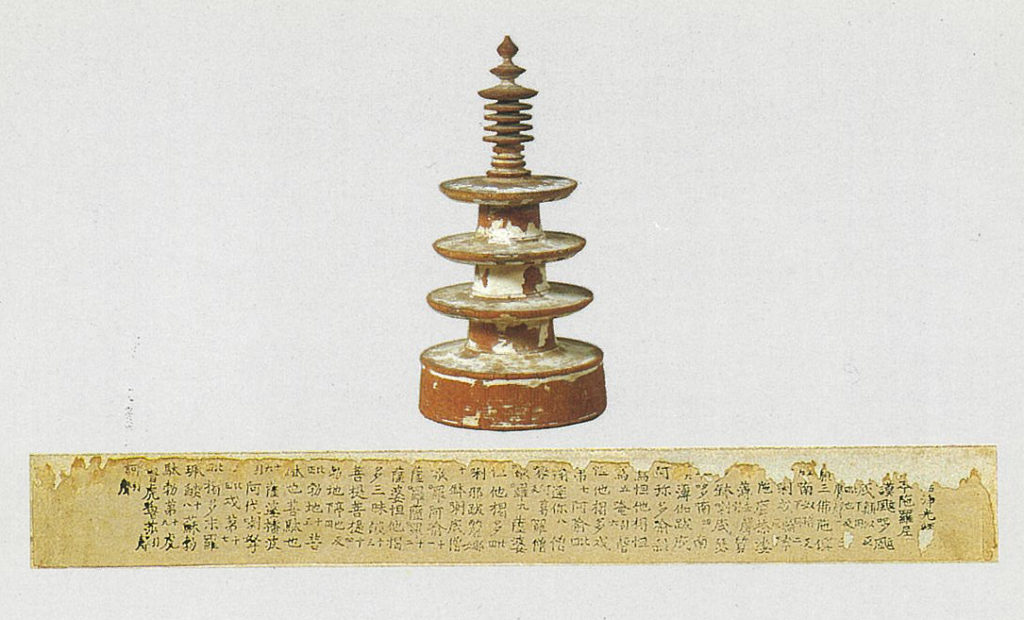 When prince Shotoku (574~622) was active as Prince Regent, in 610 the method of papermaking was introduced into Japan. The Prince endeavoured greatly to promulgate Buddhismand for that purpose，paper was necessary for copy of sutras (Buddhist scriptures) and it is said that he encourged papermaking for that reason. There are even some papermaking areas where Prince Shotoku is enshrined as founder of paper. In order to commend the illustrious memory of Prince Shotoku, the paper dealer, Ozu Shoten commissioned the artist, Gensou Okuda to paint this work of art. It is a sublime portrait taking as the motif the Imperial property, “Portrait of Prince Shotoku and two Princes” in possession of the Imperial Household Agency and including Yumedono (Octagonal meditation temple of Prince Shotoku, National Treasure) attached to Horyu Temple (Erected 607 by Prince Shotoku, oldest wooden structure in the world, National Treasure) in the background. The drawing paper is one large sheet of handmade paper produced in 1970 by the Dai Inshu Papermaking Cooperative Association of Tottori Prfecture for display at the Osaka International Exhibition. Drawn by the artist Gehsou Okuda in 1972. Recipient of the Order of Culture Merits and member of Japan Academy of Arts. Donated by Ozu Shoten Co. 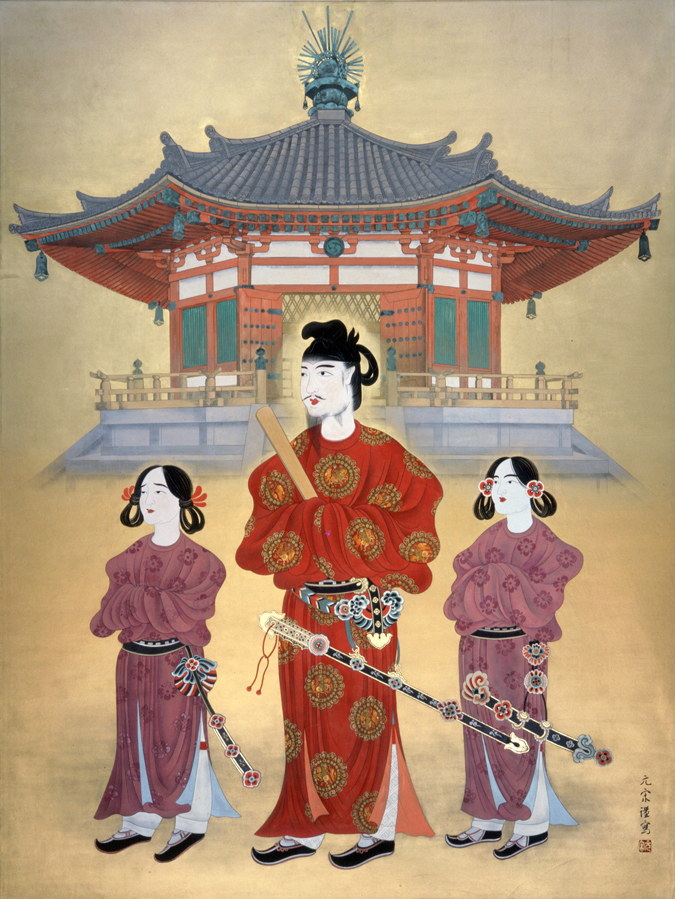 The Japanese wood)>lock printing technique of ”Ukiyoe” which was developed in the Edo period declined in the Meiji period but survived as an elaborat reproduction method of old prints. In order to introduce the high level of woodblock printing technique of Japan, Toshinio Mitsumura, founder of Mitsumura Printing Co., exhibited “An image of Kujyaku myoo” at the St. Louis International Exposition and was awarded an honoray gold cup.

The woodblock printing displayed here was restored in 1990 after eight months work, using the original woodblocks.The original is a Buddhist print of the Sung dynasty (AD960-1279) of China and is in the possession of Ninna temple (Kyoto) and is designated a national treasure. Both sides of 22·pieces of woodbloclis made from cherry wood were used, and printed 1303 times. The process served to demonstrate the best use of the strength of Washi.

The Kozo paper (Cf. glossary) was specially made by lwano Paper Mill located in Imadatecho, Fukui prefecture. It was designed to endure prints more than a thousand times, and for this, two sheets were molded together to create a thickness of about 0.3 millimeters. One sheet is peeled off when prints are mounted. Also it was dyed in old colors to bring out resemblance of the original print. Also dosa (Cf. glossary) was brushed onto the paper to prevent expansion and contraction of the paper and blurring of the pigment. 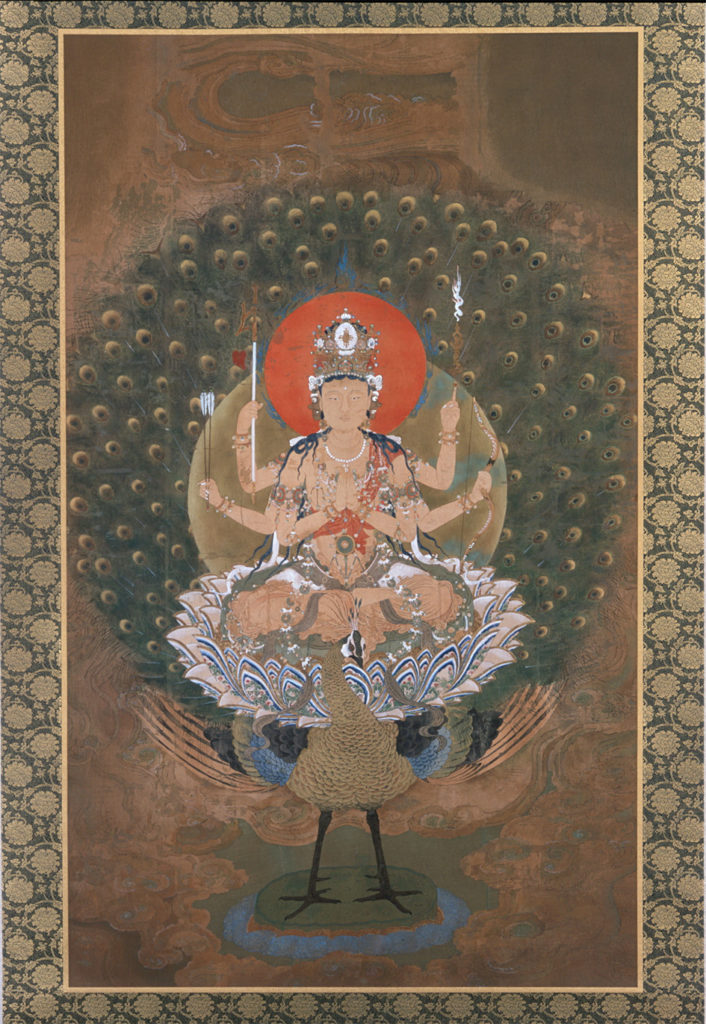 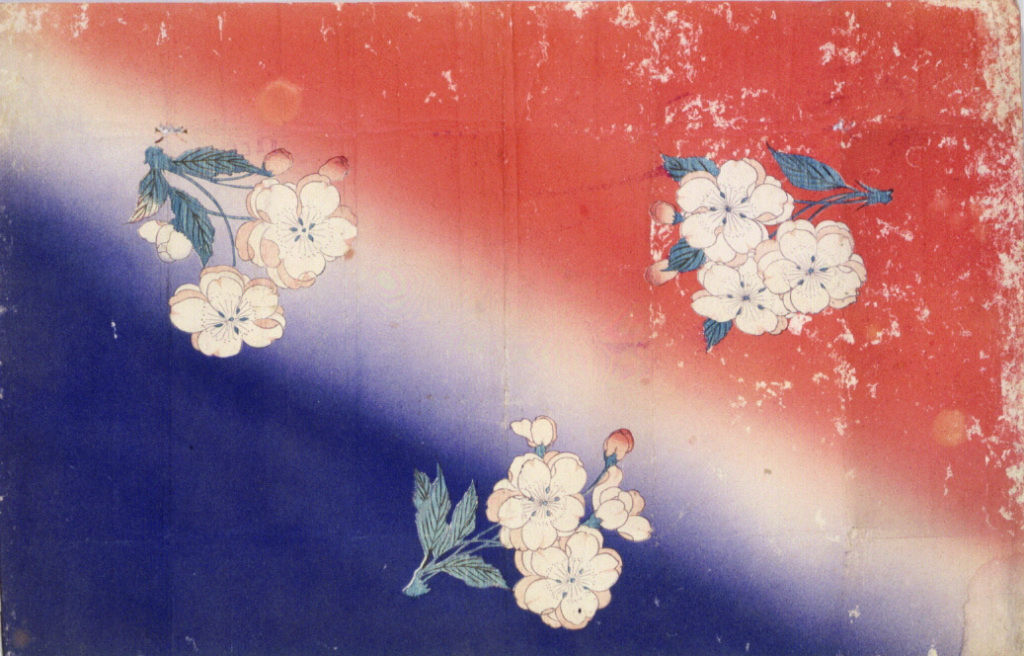 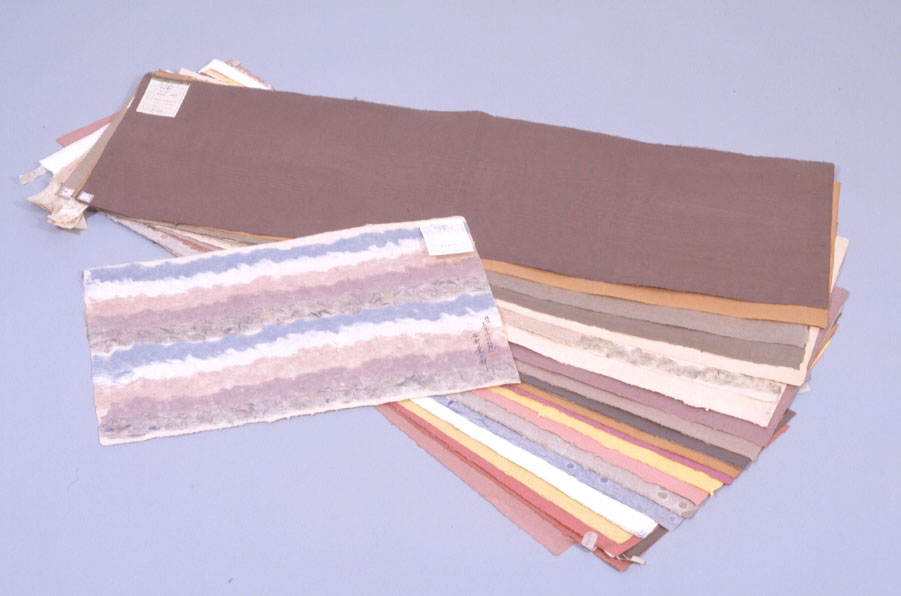 This is an Ukiyoe multicolored woodblock print created by Harunobu Suzuki(1725－70). It was first conceived about 1765, and developing from red colored block prints, the print was so beautiful like brocade so it was called Nishiki-e (Brocade picture) which later became the representative name of Ukiyoe woodblock prints, leading up to the beginning of the Meiji period. Beside Harunobu, there were such artists as Kiyonaga Torii , Utamaro Kitagawa, Sharaku Toshusai, Hokusai Katsushika and Hiroshige Ando. 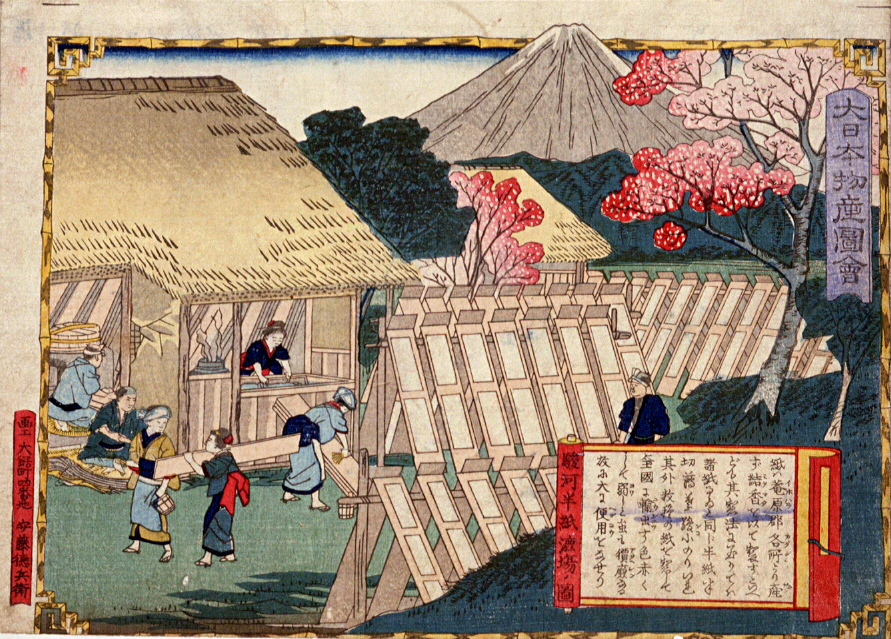 Kamiko is an industrial craft item which utilizes the strength and heat insulation of Washi. Thick Washi pasted together with devil tongue paste is then strengthened again with coating of devil tongue paste or persimmon tannin. It is then crumpled to make the cloth feel soft and then sewed into a kimono, obi(sash) or bedcovers. In the Edo period, Higo Yatsushiro, Harima and Ohshu Shiroishi were the main producing centers. 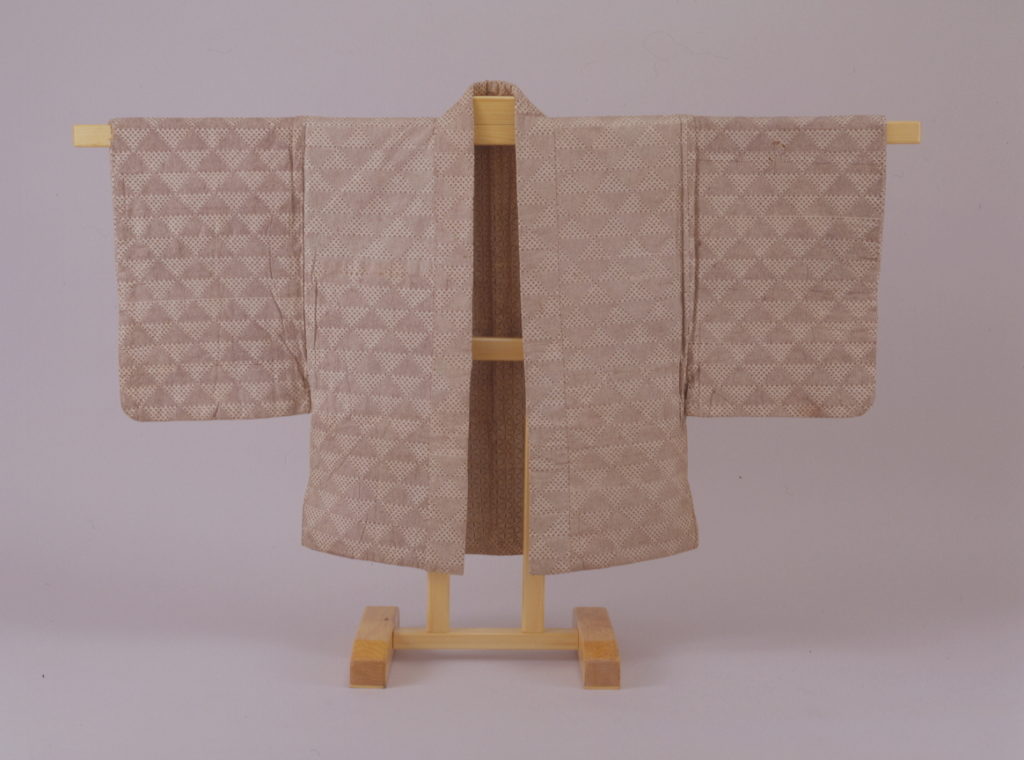 Invented by Louis Robert in 1798.
When the papermaking method was introduced to Europe in the 12th century, a stamper utilizing a water wheel began to be used for the process of beating the raw material. After the beater was invented in the 17th century in Holland during the Industrial Revolution, the beating process became mechanized. In 1798, Louis Robert invented the endless wire paper machine which could produce paper continously and in 1806, with this machine as a basis, a person by the name of Fourdrinier succeeded in making a paper machine for practical use. 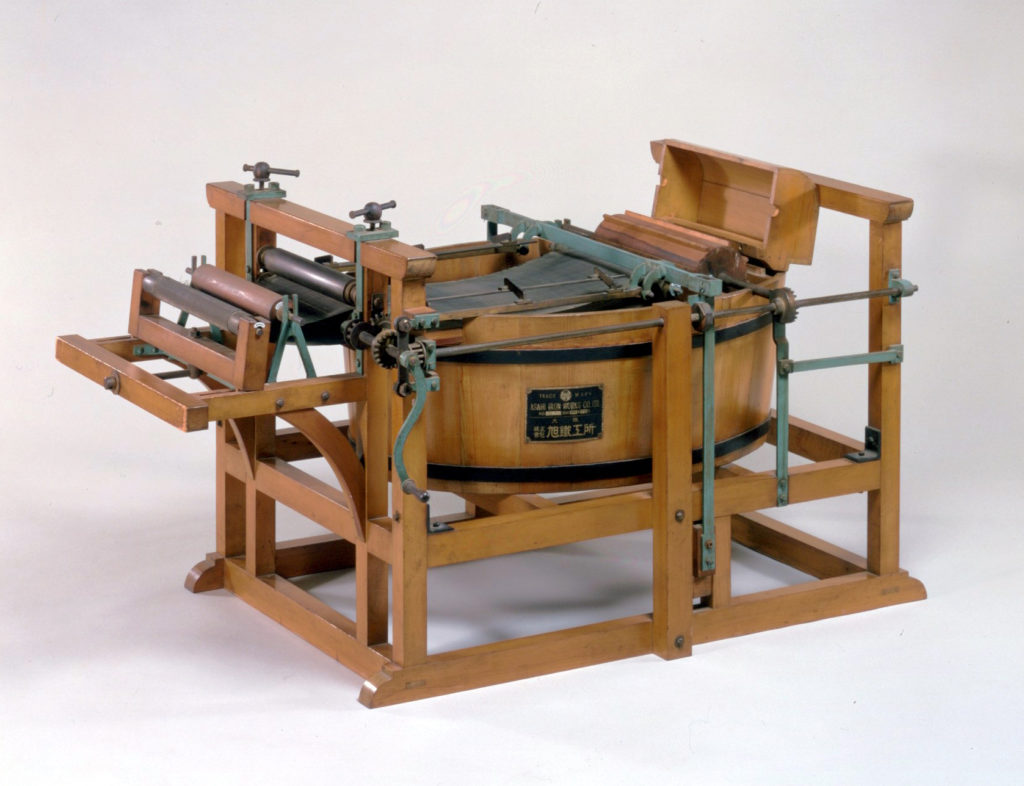 Since 1872, the Meiji government printed a deed which proved land possession. At first, it was made by print on Washi but in 1873, together with enactment of amendment of land taxes, the government printed revised deeds on foreign-style paper. It was just at the start of the modern paper industry in Japan and paper sales were poor due to imports of paper so the order for large amounts of foreign-style title deed paper was the turning point in escaping from a difficult situation. 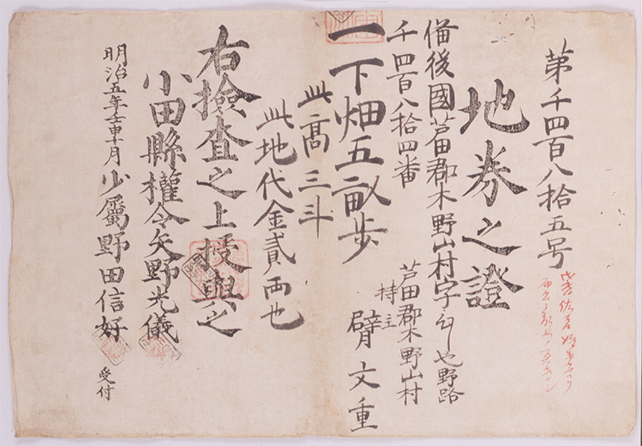 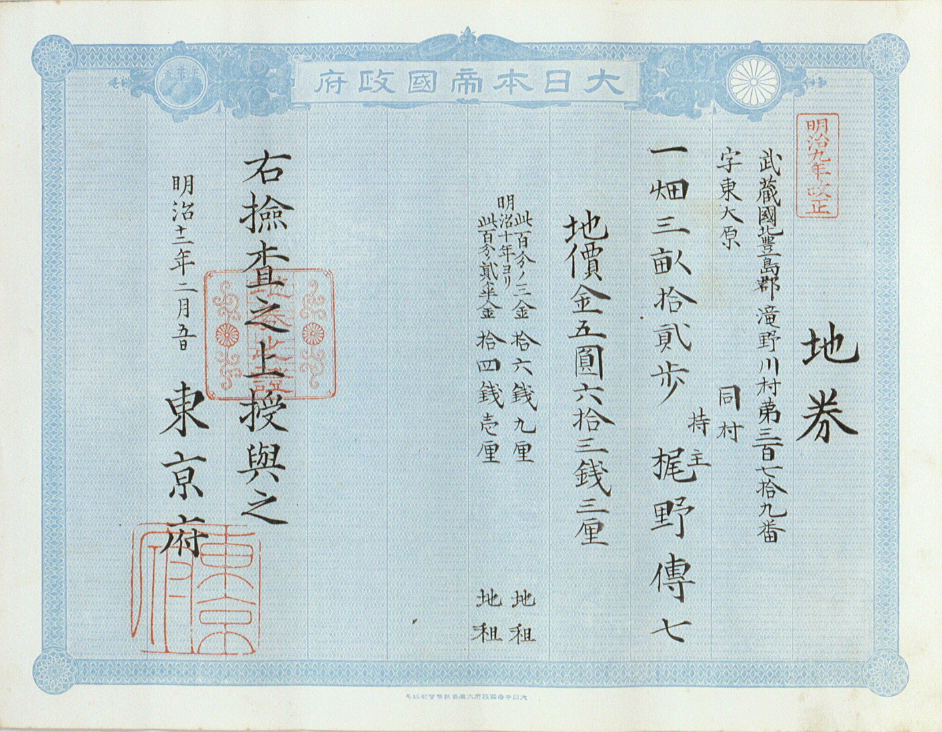 It is 130 years since birth of the Japanese foreign-style paper industry and during this long space of time, together with sample books, there are many memorials inscribed with the activities of the companies of the industry. From earliest times, paper companies and paper dealers compiled various kinds of sample books and endeavored hard to advertise. 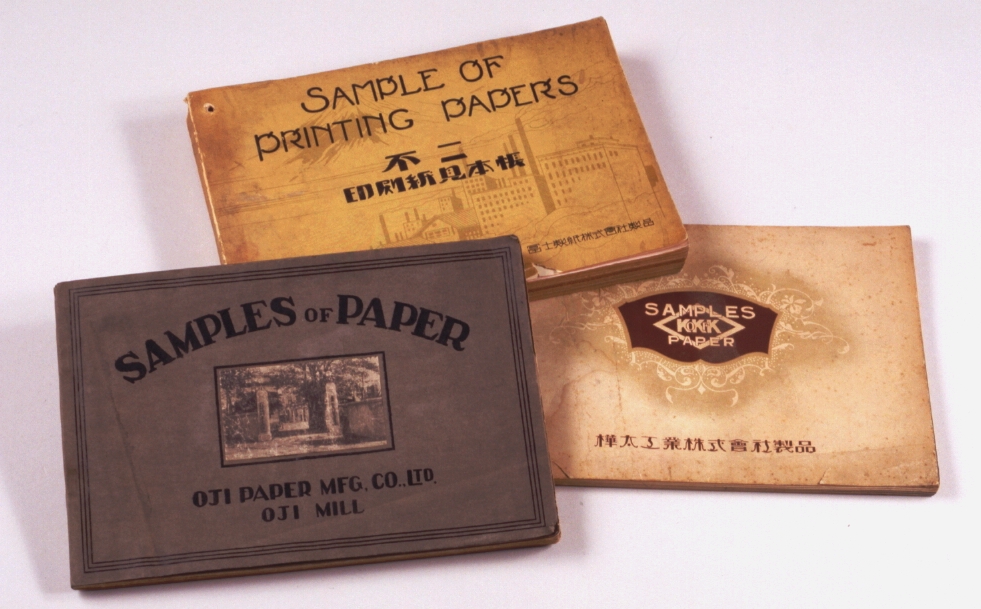